Eastgate Comics is one of the most diverse comic retailers in the country. We carry a wide selection of Comics, graphic novels/trade paperbacks, apparel, statues/toys, and back issue comics. We offer a large selection of collecting supplies, and posters to decorate your favorite room.
Founded in 2018, the store is the brainchild of Fred Wright Jr and his daughter Bailee. After visiting comic shops across the country, the desire to establish a comic shop in High Point,NC was born. The city had not had a comic shop in over a decade and once Eastgate Comics opened, it quickly became a hit in the hearts of comic fans.

The family friendly atmosphere and the place where excitement begins is not new to the name Eastgate. The comic store is located inside Eastgate Car and Home Audio a mobile electronics retail store established in 1980 by Fred Wright Sr.  The diverse combination of Car Audio and Comics, created an atmosphere of fun and wonder like no other. Whether you want to see the latest in mobile audio technology or the latest in the world of comics and pop culture, Eastgate is the place.
We offer a subscription service to help fans not miss out on their favorite comics, as well as our ebay which is open 24/7! We are also the creators of Eastgate Comic Con which is a comic book and pop culture convention.

Eastgate Comic Con is a comic book and pop culture convention, created by Fred Wright Jr, owner of Eastgate Comics. Since 2018, Eastgate Comics has held in-store comic cons, FCBD (Free Comic Book Day), and LCSD (Local Comic Shop Day) events. These events attracted visitors of all ages and produced positive results for Eastgate Comics.
Next, it was time to develop an event showcasing some of the best comic book vendors and toy dealers in the industry.  Also, some of the top artists, writers, and comic book creators will be featured in an area called Artist City.
Eastgate Comic Con promotes local talent from the Piedmont Triad and surrounding areas. This event will expose comic fans of all ages to the work produced by these individuals and promote literacy and artistic expression to young people.  With a live DJ, professional wrestling, and more, there will be entertainment for the whole family! Eastgate Comic Con will make memories that last a lifetime.
We believe Comics tell stories of struggle, failure, determination, and success.  In the end, no matter the challenge, the superhero always wins.  The ability to read these stories can bring out the superhero in us all.  Thus, making our planet a better place to live. 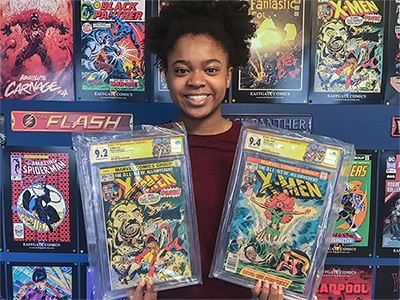